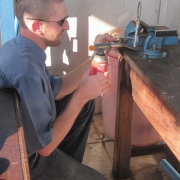 Kevin Davies earned his Ph.D. in Chemistry at the University of Pittsburgh; he is an analytical chemist that studied the energy profile and energetic fates of photon energy in photoinitiated reactions. When molecules absorb a photon and an electron is moved to an excited state, there are many ways in which the molecule can relax (typically fluorescence, phosphorescence, quenching/resonant energy transfer, bond dissociation, and heat deposition). When the energy is deposited as heat, the first few solvent shells are thermalized and pick up significant kinetic energy. This results in an acoustic shock wave that emanates outward from the molecule (known as the photoacoustic effect). This photoacoustic response can be recorded by an ultrasonic microphone. When the response time of the microphone is slower than the kinetics of heat deposition, the resulting signal is a damped harmonic oscillation at the microphone’s frequency. However, when the heat deposition is on a similar timescale to the microphone response, the response wave is ‘stretched’ to longer times, and analysis permits a simultaneous determination of energetics and kinetics, which is particularly useful in a fast photoinitiated reaction (ns-us timescales). Dr. Davies studied photoinitiated reactions during his Ph.D. studies, but was interested in adapting this phenomenon into an analytical chemistry direction.

As an Associate Professor at Florida Gulf Coast University, Dr. Davies and his group are adapting the photoacoustic effect into an analytically-useful technique in chemistry, and a tool to be used in the emerging field of photoacoustic imaging. In turbid media, the incident light is scattered throughout the sample (whether groundwater, living tissue, or samples in a cuvette). This complicates optical measurements in these sample types. However, if a photoacoustically-active reporter molecule is used, the turbidity can be a benefit by uniformly illuminating the sample, then measuring the photoacoustic response from the reporter. Just as in ultrasonic imaging, the arrival time of the signal encodes depth information, allowing for 3D chemical sensing in the turbid media. The Opolette 355 has allowed the Davies Group to replace an N2/dye laser system used for photoexcitation, and offers a wider range of power and wavelengths to their research in identifying photoacoustic reporter molecules and characterizing their photochemistry throughout the visible and NIR wavelength ranges, while permitting other photochemical processes (fluorescence, phosphorescence, and absorbance) to also be measured for the sample in the same experiment.

Want to join the discussion?
Feel free to contribute!